Faster than speeding planner, more powerful than a political locomotive, able to leap endless regulation in a single bound, the West Don Lands is changing the face of Toronto.

Though the massive revitalization project still has another five or six years to go before it’s finished, what’s done makes it clear this is Toronto’s first 21st{+-}century neighbourhood.

This is where a timid and increasingly sclerotic city has shed its historic fear of boldness and attempted something marvellous. There will be the usual detractors — the Doug Fords who don’t know what they’re talking about — but anyone who takes the time to wander this new precinct will quickly see that something different is happening here.

On a final tour this week before the push to get the place prepared for the Pan-American Games next summer, developers showed reporters a neighbourhood organized around a public realm — streets, alleys, parks — that suggests new ways to inhabit the city. 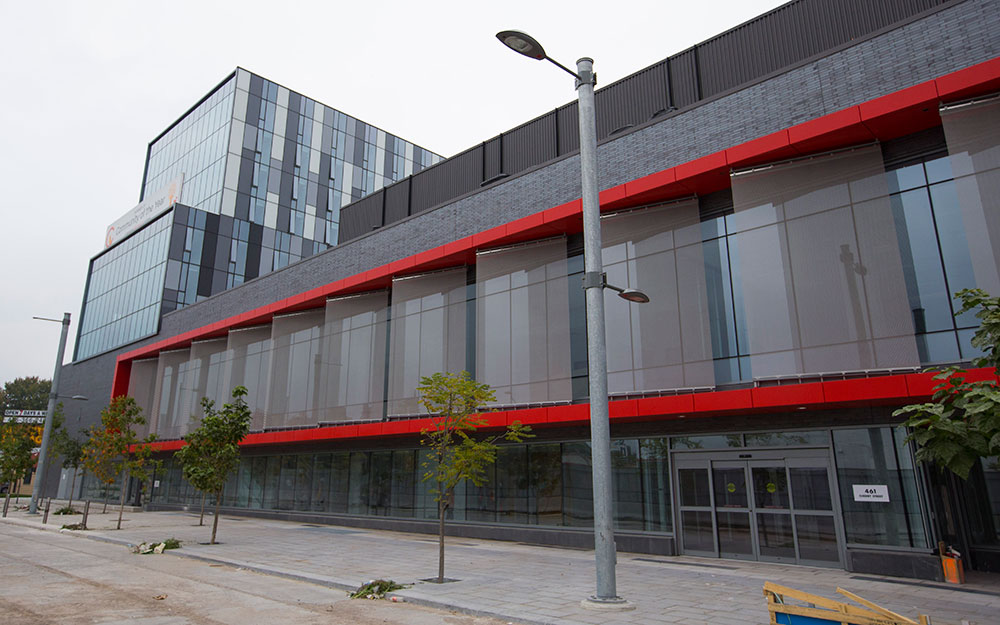 The exterior of the future YMCA building in the Canary District, which will serve some of the 10,000 athletes for the Pan Am Games and then become a community resource in the new neighbourhood.

The exterior of the future YMCA building in the Canary District, which will serve some of the 10,000 athletes for the Pan Am Games and then become a community resource in the new neighbourhood.

The main east/west axis of the Canary District, which extends from the Don River to Cherry St. south of Eastern Ave., is Front St. It now runs east to the newly configured Bayview. It is a thoroughfare like few others in Toronto. Paved in brick and narrow for most of its length, it is designed for both pedestrians and cars. Lined with unusually wide sidewalks, the new Front has a relaxed feel not often encountered in the city. It is perfect for sitting and strolling, for benches and cafes, as well as traffic.

The residential buildings now under construction will house 10,000 Pan Am athletes and officials next year. Once the games are finished, the buildings will be prepared for their final use. Temporary walls will be removed, floors laid and kitchens installed. After that, Canary District will become part of the city.

It is proof — if any were needed — that the master planning process as practised by Waterfront Toronto serves the city incomparably better than anything we have devised so far. This is planning done with the big picture in mind, not a series of decisions made in a vacuum by bureaucrats whose preferred response is to say no.

Here the sum is greater than its parts. Indeed, the West Don Lands is a demonstration project, a tour de force, a brilliant reminder of what can be done when land is publicly owned and intelligently planned. 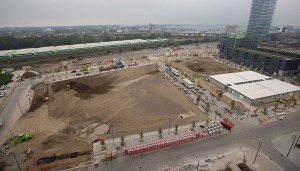 Looking south from Front St. E., bottom, to what will be a temporary green park area for the Pan Am Games, middle, then eventually condos, as well as the GO Train yards, Gardiner Expressway and Lake Ontario.

Looking south from Front St. E., bottom, to what will be a temporary green park area for the Pan Am Games, middle, then eventually condos, as well as the GO Train yards, Gardiner Expressway and Lake Ontario.

The attention to detail includes exquisite and innovative touches such as the city’s first “complete street,” or woonerf, and streetcar tracks that run along the side of the road, not down the middle. Laid out in a grid with many openings for pedestrians, the Canary District feels accessible and coherent.

The big problem is that the site is cut off on the south by railway tracks and on the east by the Don Valley Parkway and the river. A new streetcar line that moves south from King St. — expected to open in 2016 — will help, but new bridges and/or underpasses will be required, especially if the neighbourhood is to be connected to Lake Ontario.

The main obstacle, however, is the fact this land has been out of circulation so long, few Torontonians have any sense of where or what it is. The same thing was true at the nearby Distillery District when it rejoined the land of the living in 2003. Since then it has become part of the city.

So will the West Don Lands, but with housing for 10,000 people. It will be a city within a city, a place to live and work, not just visit.