JENNIFER LEWINGTON, SPECIAL TO THE GLOBE AND MAIL 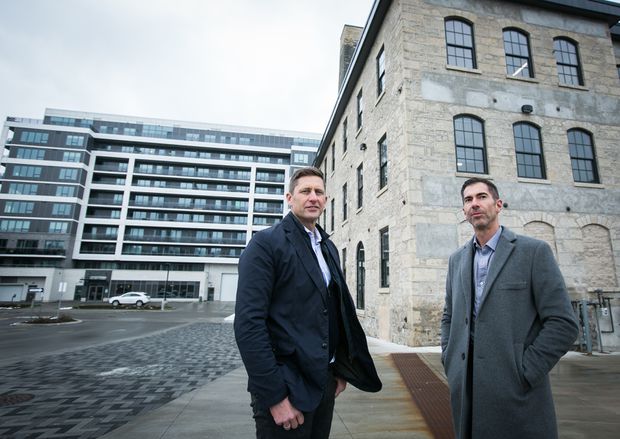 Almost a decade ago, home builder Lee Piccoli would find himself driving around a dormant eight-acre industrial site in downtown Guelph, Ont. Despite its lack of use, Mr. Piccoli could envision a new urban residential-commercial village.

What really drew him to the underused site was the iconic W.C. Wood fridge and freezer manufacturing plant situated on the Speed River that meanders through the heart of this Southwestern Ontario city.

But Mr. Piccoli had no experience with the extensive cleanup and potential pitfalls associated with brownfield property renewal. Moreover, the lack of any condominium construction in downtown Guelph in 2010 created a sense of uncertainty around the local market for mid-rise residential towers.

“This whole project from the beginning was one of the biggest gambles I have taken in my life,” says Mr. Piccoli, chief executive officer of Guelph-based Fusion Homes. “This was a complete leap of faith.”

Today, that mixed-used development he envisioned years ago is halfway to completion, and Mr. Piccoli’s gamble is starting to pay off.

COLLABORATION WITH MANY STAKEHOLDERS KEY TO BROWNFIELD RENEWAL SUCCESS

The transformation of contaminated lands into modern uses is a lesson in collaboration – from the initial purchase and subsequent resale by brownfield experts of the Wood site to incentives for site cleanup and downtown renewal offered by the City of Guelph and, crucially, the support of an initially skeptical neighbourhood association.

Known as the Metalworks, the development will eventually include five mid-rise condo towers (between 10 and 14 storeys in height), two of which are now almost sold out and with a third under construction.

Groundbreaking for the fourth is slated to begin in 2021 and the fifth should be completed in 2024.

One of the site’s defining features – one that residents and city officials insisted on – is the public access to the Speed River that’s been restored after close to a century. To make it possible, the developer positioned townhouses and mid-rise condo towers far enough away from the river to create a 50-foot wide pedestrian “river walk.” Linked to city walking trails, pedestrian bridges and adorned with public art repurposed from structural steel in the former Wood plant, it’s an impressive example of the power of successful collaboration. 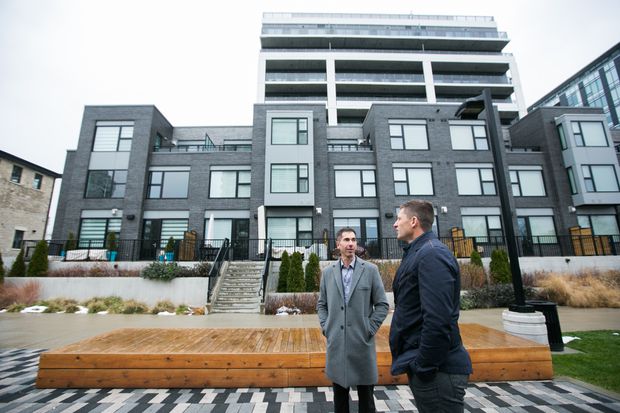 On the site itself, heritage authorities set ground rules for the renewal of an 1835, four-storey limestone building – once a distillery now fallen into disrepair. Local brewery entrepreneur John Sleeman, who re-established the family-named beer business in 1985 that was later sold in 2006, had his eye on renewing the Sleeman name as distillers. Family-run spirits-making dates to 1836 in the Niagara Region and, earlier last year, Mr. Sleeman opened Spring Mill craft distillery in the refurbished historic building instead of his original plan for an undeveloped site outside of Guelph.

“By all means, a new greenfield site is easier and cheaper, and my master distiller would have preferred it to be all on one floor instead of four,” Mr. Sleeman says. “But I’m trying to build a legacy for generations. I want people drinking our whisky for 100 or 150 years.” Part of the Sleeman legacy is that it originated in Guelph.

The Wood site’s new lease on life began with its acquisition in 2010 by Kilmer Brownfield Management Ltd., specialists in reclaiming former industrial and commercial properties and a subsidiary of the Kilmer Group. One year later, over the course of which Kilmer Group president David Harper had directed extensive cleanup work, Mr. Piccoli purchased the property from Kilmer.

“Dave Harper is by far and away the smartest man in brownfield remediation I have ever spoken to,” Mr. Piccoli says. “Having a partner like [him] beside us just gave me a level of comfort that we can do this.”

“We understood the history of the site, but we spent more time trying to figure out what is an appropriate built-form on the site,” Mr. Harper says. Remediating a brownfield property, he adds, “typically involves digging the [contaminated] material out, sending it somewhere else and bringing back new material.

“As best as we can, we want to limit the amount of excavation we have to do on site while being protective to meet [provincial] standards,” he says.

PROXIMITY TO INFRASTRUCTURE MADE THE SITE IDEAL FOR REDEVELOPMENT

Despite such challenges, the site was ripe for redevelopment. Mr. Harper cites its proximity to a GO station – 10 minutes away on foot – and the scale of the project: more than 700 condo units and close to 50,000-square-feet of commercial-retail space.

Another collaboration took shape when Guelph officials updated city planning rules, adding tax incentives to spur downtown and brownfield property renewal and providing some development-charge relief. With no downtown high-rise buildings under construction at the time, Mr. Piccoli saw an opportunity to market condos and townhouses in the $250,000 to $350,000 range, below more expensive housing options.

From the city, Kilmer received a $3.4-million brownfield redevelopment grant for the Wood site, enough to recover up to 80 per cent of eligible cleanup costs over a 10-year period.

Separately, the city provided grants of $11.7-million over 10 years to Fusion Homes to spur downtown renewal and brownfield cleanup, confident that the funds would be more than recouped by rising property values on a redeveloped site. According to city officials, the grants represent 11 per cent of the estimated $140-million assessed value of the Metalworks’ first three phases – well above the typical rates for vacant industrial land.

Along with the Metalworks, several mixed-use developments that were attracted to the city’s downtown renewal incentives now account for one-third of residential growth targets set for the City of Guelph by the province.

The Metalworks project, Guelph Mayor Cam Guthrie says, “checked off all the right boxes from many different categories, not just financial but social, cultural, heritage and residential [growth] targets.” He added: “It has been a catalyst for that area to be developed.”

Many aspects of the collaboration that were vital to the project’s success were achieved with an impressive lack of friction.

When homeowners adjacent to the Wood site first heard the city might allow towers up to 18 storeys high, they banded together immediately to form the Ward Residents Association.

“In retrospect, all of our actions were based on fear,” recalls Maria Pezzano, former chair of the association. “We didn’t know what was going on there and we didn’t know who Kilmer was.”

The volunteer group soon found itself seated at the table with the city, Kilmer and Fusion to discuss issues, with public access to the Speed River a top priority. “It was an opportunity to rewrite history and I could see how important it was then and it is now,” Ms. Pezzano says.

Unusually, the mayor says with pride, residents, the developer and city officials managed to reach a consensus regarding the project before its approval by council.

“In the end, you get a development that exceeds your expectations [as the developer] and our expectations because we are both affected by the outcome.” Despite an initially “exhausting and frightening” exercise, she is now “really pleased, grateful and really excited.”

Mr. Piccoli is no less elated about the transformation under way. “Coming to the site always fills me up,” he says. “I can be having the worst day and I come here and get full of inspiration and energy.”