Larry Tanenbaum: His ‘footprint is everywhere in this city’

Larry Tanenbaum: His ‘footprint is everywhere in this city’ 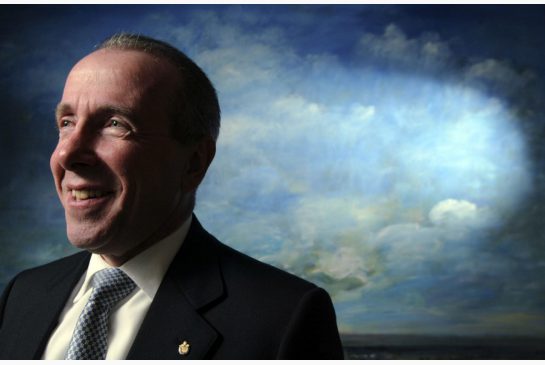 MLSE chair Larry Tanenbaum. The MLSE co-owner likes hoops, hockey and soccer — and vodka, picking up tabs and working those quads on the elliptical. Steve Russell / The Toronto Star

In 1911, Abraham Tanenbaum sailed from Poland to Toronto, where he built a family construction empire from scrap metal.

Though their day jobs were nothing alike — Abraham drove a horse and cart searching for steel remnants, while Larry jets to meetings in his private plane — the two Tanenbaums bookend a century during which the entrepreneurial family helped shape Toronto spiritually, physically and philanthropically.

“Larry’s footprint is everywhere in this city,” says Paul Godfrey, who nearly 40 years ago partnered with Tanenbaum in a losing effort to build an NFL stadium on the then “barren land” at highways 400 and 7.

“He is a man who — and I can tell you this from personally dealing with him throughout the years — looks for no personal credit. He is shy about getting his name in the paper.”

Tanenbaum would not participate in this story, the aim of which was to better understand the reserved man who upped his ownership stake in Canada’s iconic hoops-and-hockey brand to 25 per cent this month.

We know lots about others in the organization — Maple Leaf and Raptor players, their coaches, their general managers — but very little about Tanenbaum, holder of the nation’s most-connected pro-sports resume: he’s the MLSE chair, he serves as a governor of the NHL, the NBA and Major League Soccer, and is a member of influential executive committees for each league.

The 65-year-old Toronto native is also a construction and investment tycoon, punching in as chairman and chief executive officer of Kilmer Van Nostrand Co. Ltd., headquartered in the Scotia Plaza.

Still, we learned a few tidbits from friends and colleagues:

Tanenbaum doesn’t have an office at MLSE headquarters. He eats at all the organization’s restaurants and pays his own way. He doesn’t bill the company when he uses his jet for sports business. He gets a pair of tickets for each Leaf or Raptor game — but buys the rest he uses, including the times he brings his 10 grandchildren en masse to the Air Canada Centre.

MLSE employees like him. Tanenbaum received a standing ovation last week from staff when it was announced he’d remain chair, even though new owners Rogers Communications and Bell will equally share 75 per cent of the company.

What else? Well, the smartly groomed man who’s all business when he’s on the clock likes to loosen his tie now and then.

Tanenbaum drinks Belvedere vodka. He’s a foodie, whose wife Judy was known to pinch menus from cool restaurants like the Palm Beach Grill in Florida to help build e11even’s kitchen. A home gym is a nod to his love of fitness. He swims and uses elliptical machines. Travelling is a passion. He doesn’t smoke. Friday night is family night. And, sometimes people mix him up with another familiar MLSE face.

“He’ll walk the (ACC) corridors and people will say ‘Richard Peddie’ and I get ‘Hi, Mr. Tanenbaum,’” says Richard Peddie, MLSE’s president and CEO, adding the men joke about it.

Tanenbaum may be gaining a new unofficial title: No. 1 whipping boy for frustrated, Cupless Maple Leaf fans now that Peddie — a favourite lightning rod for Leaf Nation when it revolts over team failures — is retiring this month.

And fans yearning for a Stanley Cup mirror the same desire within Tanenbaum, says NHL commissioner Gary Bettman, who has spent time with him in the MLSE chair’s row 7 ACC seats.

And “when it comes to the Leafs, nobody is more passionate about the team and its role in the community and how it performs on the ice,” says Bettman. “I think there may be nothing more important to him to accomplish in the future than for the Leafs to once again win the Cup.

“I think he is absolutely driven by that concept.”

Bettman says that drive is evident in the time Tanenbaum spends at the ACC. The NHL commissioner estimates Tanenbaum is at a Raptor or Leafs game 80 nights a season.

“For him to be as committed as he is, is something that requires a lot of him, not just emotionally and financially but in terms of his life,” Bettman says. “He works extraordinarily hard, but that’s what successful people do.”

That commitment has also overseen “damn close to $1 billion” invested in construction and redevelopment around Toronto, says Peddie.

He rhymes off the MLSE checklist: $265 million for the ACC; $50 million in arena renovations, plus an annual $8 million in upkeep; $18 million in BMO Field (home of Toronto FC); $500 million in Maple Leaf Square, a property that includes e11even, Real Sports Grill, a sports apparel store, a boutique hotel and condos. Peddie says Tanenbaum was a key player in pushing MLSE to create and maintain high-quality facilities.

In terms of athletics, hockey and basketball rule the MLSE flagship as its heavy-hitting franchises. So how did soccer fare when TFC first kicked off in 2006?

“It started with the enormous success we had in the market,” says Garber, referring to the capacity crowds at BMO Field.

“But it was also the respect and the credibility that MLSE, with Larry’s lead, gave to the league, gave to me as commissioner that helped elevate our status — not just in Canada, but throughout our entire league.”

When Garber visited Toronto in the early years of TFC, Tanenbaum would invite the commissioner to sit courtside at a Raptors game or behind the bench at a Leafs home date “and ensure I was interviewed between periods.”

“It gave Major League Soccer an elevated status that I think very much came out of his view of the importance of the little things (to ensure) we had a very strong identity,” the commissioner explains.

Tanenbaum has had dizzying achievement in sports. He’s also failed in spectacular fashion.

“It’s recent success that’s blurred the past,” says Godfrey, now chairman of the Ontario Lottery and Gaming Corporation, who was at Tanenbaum’s side for their shared flop: not getting an NFL stadium built.

Tanenbaum struck out on another Godfrey brainwave: building a domed sports stadium in downtown Toronto to house a major-league baseball team.

“He put in a design bid to build the new stadium with the retractable roof — he didn’t win that contest,” notes Godfrey, the former Metro chairman who was responsible for bringing the Blue Jays to Toronto.

“Then he tried to get the basketball franchise but lost it to the Bitove (family). But he never, ever said a bad word about anybody or anything. He was as gracious in defeat as he was in the all the victories.”

Godfrey’s first brush with the Tanenbaums was with Larry’s father, Max, who donated about $100 to Godfrey’s first political campaign. Godfrey had never met the man so he visited him to say thanks.

“Max said, ‘I’m giving you this and I’m never going to call you or ask for anything.’ You know what? He never, ever called me or asked for anything,” Godfrey recalls.

“Max Tanenbaum was a man of his word . . . People did deals with him on a handshake. He was very philanthropic; he gave money to people who didn’t have any. He felt you should share if you were fortunate enough to have something and, in tough times, you had to give.”

“Larry is very much a chip off the old block,” Godfrey says of Tanenbaum’s charitable works.

“It all goes back to the Tanenbaum family belief that if you take something out of the community like they have, you have to set the example for your children and your grandchildren; you have to give back,” says Godfrey.