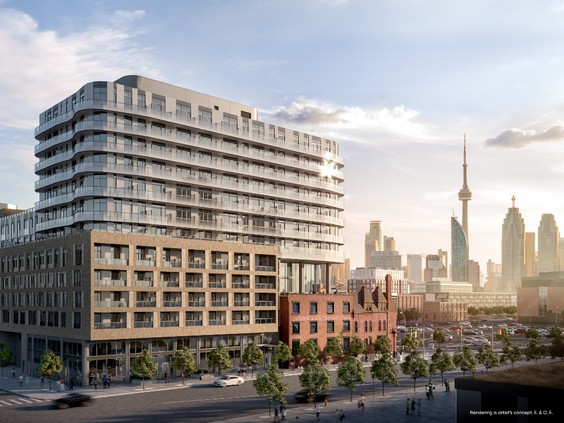 When Ken Tanenbaum, vice-chair of the Kilmer Group, first saw the maroon-coloured brick Victorian pile at the corner of Cherry and Front streets in 2012, he was captivated.

“The building has such great character, with beautiful brick that would have come out of the Brickworks in the Don Valley,” says Tanenbaum.

From the mid-1960s to 2007, the building contained the Canary House restaurant, a popular diner where filmmakers and truck drivers would grab bacon and eggs. To denizens of the then-industrial Port Lands, its sign, with the bright yellow bubble font, was unmistakable.

The Canary District gets its name from the restaurant. Tanenbaum, along with his partners at Dream, chose the handle when they redeveloped the 2015 Pan Am Athletes’ Village site into a 35-acre master-planned community. Canary House will be the fifth building to go up in the community, which will also include a purpose-built rental that Kilmer Group is developing with the province of Ontario in which 30 per cent of the units will qualify as affordable housing.

Before the site held the restaurant, it was a hotel, “and even earlier it was the oldest school in the city,” says Tanenbaum of the Palace School, built in 1859.

But the Canary House’s swan song will finally be sung. In 2024, it will transform into a mixed-use residential building. And scrambled eggs could still be on the menu; the historic portion of the original building is being connected to the residences “as a standalone signature restaurant or retail amenity for the community,” Tanenbaum says.

Live-edge wood furniture, stone walls and dim lighting in the lobby have the feel of a luxurious alpine retreat. PHOTO BY PHOTO COURTESY DREAM UNLIMITED AND KILMER GROUP

Its central staircase will be restored, in addition to “a chest freezer that was likely installed during the restaurant’s early operations, as well as a safe and a safe room that were used during the hotel tenure from 1892 to 1909,” says Tanenbaum. He’s linking arms with Dream on the preservation work, alongside building conservation and heritage experts at ERA Architects.

The new 206-suite building, designed by BDP Quadrangle, will be 13 storeys to fit into the community, Tanenbaum says. Prices have been set in the high $500,000s for a one-bedroom starting at 461 square feet to an 872-square-foot three-bedroom starting in the $900,000s.

“This area is all midrise,” notes Tanenbaum. “It’s very much in the spirit of Jane Jacobs and [the idea of] eyes on the street. This is liveable density; the whole Canary District is designed with that midrise approach. So it has a very nice feeling on the street. If you take your bike you’re not overwhelmed by towers.”

“Canary House acts as a gateway to the emerging Canary District community,” adds Les Klein, principal of BDP Quadrangle, who says the design “pays homage to both the Indigenous and industrial heritage of the site. The new building combines references in patterned precast concrete panels to the birch trees that once defined the edges of the Don River.” 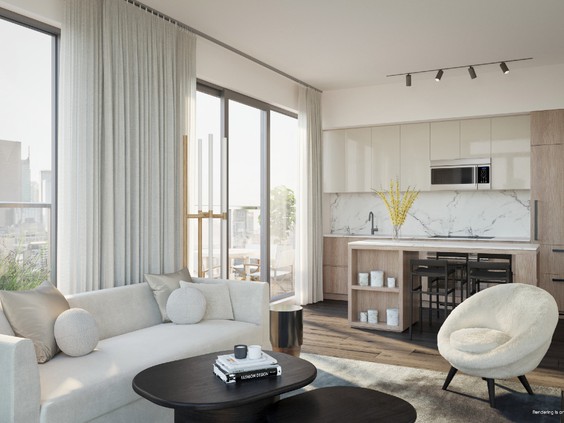 Suites will be clean-lined and sport bleached wood tones and slabs that mimic marble. PHOTO BY PHOTO COURTESY DREAM UNLIMITED AND KILMER GROUP

Elastic Interiors — the firm behind the suites and public spaces — also borrowed from nature’s playbook.

Wood and wood-inspired materials as well as stone, chosen for their soothing and welcoming qualities, will be found in both public and private spaces in the building, says Enrique Mangalindan, Elastic Interiors’ partner and director of interior design.

Suites will be clean-lined and sport bleached wood tones and slabs that mimic marble, he says.

“We brought a resort mentality to Canary House,” says Mangalindan,” who notes the condo will “feel like a hotel in terms of its rhythm and energy.”

It’s familiar ground for the U.K. firm – they’ve recently relocated to Toronto – known for their design work at luxury resorts in Dubai, Greece and Croatia.

Live-edge wood furniture, stone walls and dim lighting in the lobby have the feel of a luxurious alpine retreat.

“Distinct spaces throughout the lobby invite occupants to relax with a beverage or get to know their neighbours,” says Mangalindan.

A cozy library tucked along a corridor on level six, meanwhile, is lined in wood shelves complete with inset seating.

Muskoka stone fireplaces — in the lobby, the private dining room, by the outdoor pergola on the rooftop patio and in a party room — also bring a relaxed vacation feel to the condo, says Mangalindan. While the fitness room, with double-height ceilings to maximize light, is wrapped in panoramic views of downtown. 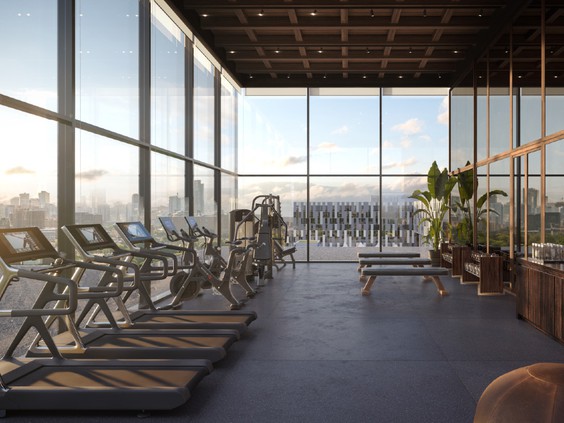 The fitness room, with double-height ceilings to maximize light, is wrapped in panoramic views of downtown. PHOTO BY PHOTO COURTESY DREAM UNLIMITED AND KILMER GROUP

“The 18-acre Corktown Common park” – a few blocks from the future Canary House – “is a jewel,” he says. “For me, it’s the entry point into the whole Don River Trail System. You see the river and at the bottom the Bala Underpass. It allows people to go from that park onto the Don River Trail and ride to Edwards Gardens and the Brickworks.”