Creating a complete community in Port Credit ‘ is incredibly exciting’

Creating a complete community in Port Credit ‘ is incredibly exciting’ 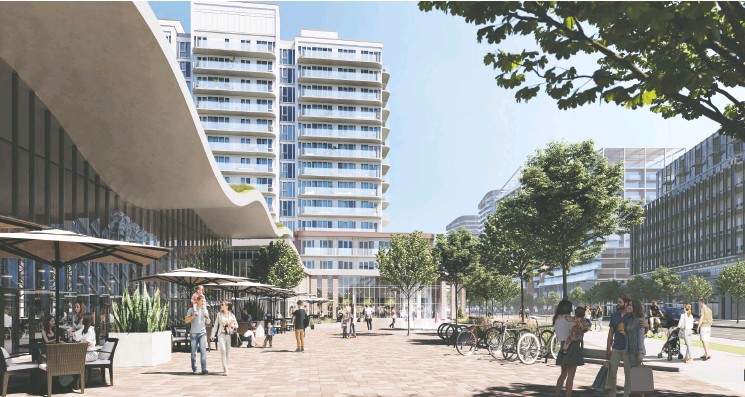 Courtesy of Port Credit West Village Partners – Brightwater, on the shores of Lake Ontario, will bring a total of 2,995 housing units to the 72-acre site.

Many condo developers tout the idea that their buildings are for everyone. In reality, most towers — with limited two-, and only sometimes three-, bedroom units – aren’t designed for growing families with kids in need of space to play outdoors.

Still, you can hardly blame a developer for trying. Sites with ample room for green space are rare in the city. But Brightwater — a mixed- use master- planned community coming to Port Credit’s shoreline — is aiming for mass appeal.

When Brightwater is finished building in 2023, its new community will contain a range of housing types designed by an array of architectural firms, along with more than 300,000 square feet of amenities including retail, restaurants and office space, and a new elementary school and community centre.

“Creating a complete community is incredibly exciting,” says Ken Tanenbaum, the vice- chairman of the Kilmer Group. “We love Port Credit. It’s a jewel in south Mississauga on the lake, with parks and a real sense of its own self. It’s in the middle of a mature area that has its own beautiful character.”

Located west of the Credit River, Brightwater’s 72- acre site straddles the waterfront on its southern edge and Lakeshore Boulevard to its north. Once a wasteland, and since remediated, “the area had a history of industrial uses (for) over 100 years,” says Tanenbaum. “It was bordered by the growing Port Credit community. Those people would constantly look over the fence and imagine it was part of their community.”

They were so determined to integrate it into their fold that they worked with the City of Mississauga to create a 62- page booklet called Inspiration Port Credit. “That planning document allowed us to move forward with a master-plan community that really honoured the spirit of the people of Port Credit and the City of Mississauga,” says Tanenbaum. “In a nutshell, developers were urged to draw people to the water’s edge to live, work and play.”

For Brightwater, the Kilmer Group has joined other industry heavyweights — Diamondcorp, Dream Unlimited and FRAM + Slokker — who collectively call themselves the Port Credit West Village Partners.

“When you’re building 72 acres, the trick really is ( to have) cohesive diversity,” says Tanenbaum. “The term was coined during our time doing the Pan Am Athletes’ Village in the West Don Lands, which is now the Canary District, where we had different architectural expressions that don’t all look the same and are very much simpatico.”

The 80- acre Athletes’ Village, which was developed with Dream and completed in 2015, saw the construction of six buildings, municipal roads and infrastructure.

Brightwater is a similarly sized swath. “Within a canvas this big you want a wide range of product types,” says Tanenbaum “That gives us the opportunity to bring to market things that people want for families, singles, people in a live/work ( situation),” he says.

When complete, the project will feature four buildings — two residential and two commercial, one with an LCBO store designed by Turner Fleischer Architects showcasing a slatted design modelled after shipbuilding, the other with a green roof — bringing a total of 2,995 housing units to the area: 522 townhomes, 2,458 apartment and condo units and 15 live/work dwellings.

“The master co-ordination is being done by Ralph Giannone of Giannone Petricone,” says Tanenbaum, noting the first buildings, phase 1 and 2, are the purview of Diamond Schmitt. “We’re also working with Superkul and Public Work. It’s such a unique opportunity to develop at this scale: 3,000 units within the urban context is so rare to do.”

A push to make Brightwater pedestrian- friendly should also make for good quality of life here, he says. Eighteen acres of new green spaces — including a nineacre waterfront park — are planned for the site.

A walkable mews, connections to the waterfront and the rest of Port Credit, as well as cycling routes will take precedence over car traffic. Wider boulevards interspersed with pretty plantings will encourage people to stop to smell the roses. Bioswales – trenches that absorb storm water – will be on every street to capture the rain.

Bioswales are “low-impact drainage,” says Tanenbaum. “Instead of ( rain) running into the catch basin on the street you use the absorptive capacity of the earth.” It’s a stormwater management system that also has a secondary benefit: “At street level, residents will see a (planted) green corridor.”

Of course, Brightwater’s approach wouldn’t have been possible without 72 acres to work with.

“This space has given us the opportunity to think holistically. We’ve integrated the park space, the retail space, the pedestrian experience,” says Tanenbaum.

The scale also ensures a wide range of housing. Of course, if you do feel like being closer to the core, you can hop on transit.

“The Port Credit Go Station has you in downtown Toronto in 20 minutes,” Tanenbaum says.

Prices to be released. For more information, visit experiencebrightwater.ca.